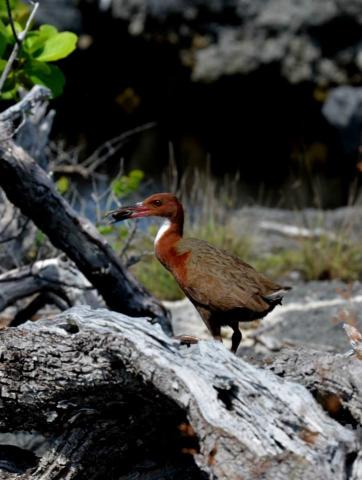 A new research paper published on Aldabra’s endemic white-throated rail Dryolimnas [cuvieri] aldabranus has shown two new facts about this unique bird: it evolved among the most rapid documented loss of flight known in birds so far; and it should be considered an evolutionary distinct species from Dryolimnas cuvieri, not a subspecies as previously thought.

Flight loss has evolved independently in many island bird species around the world, particularly in rails. On small islands which lack large predators, flight is often no longer an important advantage, and retaining flight muscles would require a lot of energy. There are therefore many bird species on different islands around the world who have become flightless over time.

This trend for flightlessness among many island birds has also contributed to their high extinction rates over the last 50,000 years, as they were often unable to survive the arrival of humans and the suite of non-native predators that were introduced.

Following the demise of the dodo, and other flightless parrots and rails in the Mascarenes, the Aldabra white-throated rail is now the last surviving flightless bird in the Western Indian Ocean. The other surviving subspecies of Dryolimnas cuvieri, which lives in Madagascar, can fly.

The Aldabra white-throated rail is somewhat of an anomaly, as unlike the rest of its species it cannot fly, yet it is only considered a subspecies. This level of variation within a single species is explained by the Aldabra rail being one of the fastest examples of the evolution of loss of flight documented, and it is genetically more distinct from the Madagascar lineage of rails than current taxonomy suggests.

To investigate this anomaly, SIF researchers and collaborators analysed modern samples and historical (museum) specimens to examine the genetics and morphology of the flightless rails of Aldabra. The museum specimens were needed to obtain the DNA from the extinct rails from Assumption. The results show surprisingly high genetic divergence of the Aldabra rails from the Madagascar population, and confirm the divergence of the Aldabra and Assumption rails populations from those on Madagascar between 70,000 and 130,000 years ago. The Aldabra rail’s flightlessness therefore must have evolved rapidly, in less than 130,000 years, which also agrees with estimations from the fossil record. The findings, however, do not end here.

The significant genetic differences found between the Aldabra and Assumption subspecies from the Madagascar population led the researchers to argue that these genetic and physical differences mean the Aldabra rail should be re-classified as a distinct species, which has implications for its management and protection. The researchers provide numerous examples and suggestions of how best to protect the Aldabra rail in their research paper, ‘Rapid loss of flight in the Aldabra white-throated-rail’. They also provide a recommendation to IUCN to re-assess the Red List (threat) status of the Aldabra white-throated rail, as its current status is based on the far less threatened and more widely distributed Madagascar white-throated rail, and is inappropriate for the conservation of the Aldabra rail.

As the last flightless bird in the Western Indian Ocean, the Aldabra rail has long had unique conservation significance, and this paper confirms and increases its importance. It is crucial that this unique endemic species receives appropriate recognition, protection and conservation management.